This article is a brief introduction to static analysis tools to hunt for client-side web vulnerabilities while giving some examples of ways I’ve successfully employed it so you can have fun with these tools too.

What’s this about static analysis anyway?

Static analysis is different from dynamic analysis (e.g., black-box testing with Burp). It never actually runs any code or depends on any running processes but instead parses raw source code. Think of the linter for your favorite programming language that complains about bad code patterns – that’s static analysis. 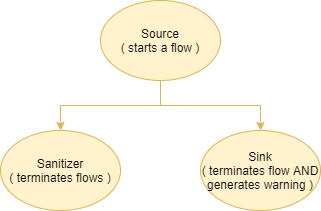 Like magic, right? It basically means you can automagically determine if there’s any way for you as an attacker to control any data that ends up in an exploitable function.

In line with that, a few weeks ago, I thought: whenever you visit a web page you always have the source code of any relevant javascript, does that mean you can use static analysis (in particular data flow analysis) to discover DOM XSS vulnerabilities?

It turns out that yes, you can, and it works pretty well even if the scripts are minified. However, there are many ways static analysis can break or be made to work better, and I want to walk you through how to do this kind of analysis yourself and some caveats to watch out for.

The gist of the pipeline

The gist of how the analysis pipeline goes is something is like this:

And we’ll talk through them in that order because there are things to think about at both steps.

When I started working on downloading all the javascript snippets on a page, I quickly realized that there were some problematic scenarios I had to plan around:

Realistically there’s not going to be any clean way to tackle all these points, and there’s always going to be some websites you can’t analyze properly, but oh well.

In the end I made a Chrome extension that dumps all loaded scripts onto my drive from the browser’s current context just to get around the authentication problem and used a prettifier on all files before analysis.

Still, to be frank, I’m not sure the extension was worth the effort because there are so few sites that bother with protecting their scripts with a login screen, and you could probably just dump all the scripts from Burp with an extension. I still recommend prettifying source codes though because most static analysis tools will report line numbers and minifiers tend to just inline everything.

Not much point to an “error on line 1” message if everything is on line 1, right? :P

To make life easy for everyone involved, I wrote a utility that grabs all the javascript snippets on a given page, dumps them into a folder underneath the utility, and optionally prettifies and deobfuscates them.

You can grab it here so you don’t have to write one yourself.

Once you have the files, the real fun begins.

There are a few static analysis tools out there that support data flow analysis, the two I ended up digging deeper into are:

CodeQL is super cool but also weird. It’s a mixture of Datalog (think SQL in steroids) and static analysis tool, and exposes a lot of low-level primitives to you, allowing you to do some super cool and detailed analyses. 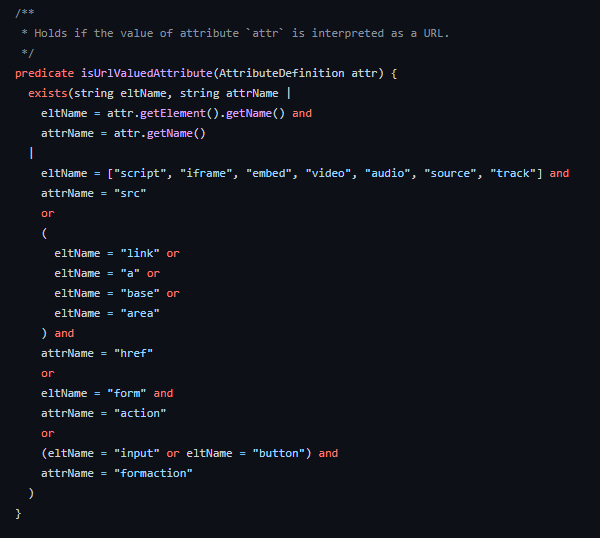 The downside is that the development experience is genuinely terrible for custom rules and deploying them.

This is for three reasons:

As a result, it has a much steeper learning curve than the 2nd alternative that I’ll be focusing on in a little bit.

Even with that said, ultimately, I think CodeQL is the superior choice for dataflow analysis because once you successfully write your queries and set everything up, CodeQL gives you some absolutely crazy insights like the exact path data took through the program, and it does things like semantic equivalence (think X+Y being the same as Y+X) and many other things exceptionally well – it can even analyze minified JS code without making you want to jump off a cliff and does not have as many blindspots as some alternatives, which is quite an achievement.

I recommend checking out CodeQL eventually because it honestly more impressive and is now what I now use in my ‘production bug hunting environment’, but this article will be focusing on another tool mentioned below because it’s just… way way way simpler to explain how it works and will still let you find plenty of bugs.

I only recently stumbled upon this tool after it was mentioned to me by my friend dubs3c, but it has some clear advantages over CodeQL and some clear disadvantages:

So if your goal is to set up a quick static analysis pipeline without worrying about a ton of crap I HUGELY recommend semgrep. It’ll get you enough mileage to find bugs and also give you an excellent path to learning more about static analysis.

Here’s an example of a Semgrep query that I used to find DOM XSS in a page in the wild:

Which basically just tells Semgrep to look for ways for data to end up in innerHTML or insertAdjacentHTML from any portion of your url. Saved as domxss-inneradjacenthtml.yaml you’d then run the semgrep utility like so:

If it finds a dataflow path from one of the sources to one of the sinks it’ll spit out an error message highlighting the relevant sink, the source file it found the issue in and the appropriate line on the code.

You can also define sanitizers that will terminate any data flow path without generating a warning message so as to avoid false positives (e.g. you can set urlencode as a sanitizer so any data flow that goes through it is terminated since it’s likely not exploitable), though I didn’t bother in the above case since I just wanted to find all sinks which any data can reach.

You can play around with custom rules through the semgrep sandbox available on their website here, which is a pretty fast way to learn.

One big downside of Semgrep is that it won’t pick up wrapped functions. For example, it can pick up this:

But won’t pick this up:

It does makes sense because marking output() as dangerous would be completely useless to anyone since it might have thousands of calls in the code, but in practice the above basically means that the more time you spend adding potentially dangerous functions ( like dangerouslySetInnerHTML ) as sinks the more things you’ll find because the static analysis pipeline won’t back-propagate the innerHTML call to mark e.g. the output function as problematic.

Putting it all together

The hard part is already done: we have a way to dump scripts and we have a static analysis pipeline with at least one rule. Next step is either adding more better rules or improving the dumping pipeline, though I recommend writing more rules because that’s ultimately what it comes down to – having patterns for bad bode.

If you’re wondering if this actually works, it totally does. Here’s the output of semgrep on a (anonymized) real DOM XSS vulnerability I found on a storefront (and of course reported) by using semgrep + my dump-scripts utility.

There are undoubtedly blindspots, and it’s undoubtedly not perfect, but it can find bugs and what more can you ask for? :)

That’s about all there is to it. I encourage you to think of ways you could automate this further – maybe run it automatically on newly discovered scripts or maybe pick up different bug classes like exploitable iframe postMessages, or maybe give CodeQL a try to pick up bugs more accurately.

WRITTEN BY
Sam Anttila
Information Security Engineer @ Google. Opinions are my own and I do not speak on behalf of my employer.

What's on this Page